The all images generator.

The AIG device generates completely random images on a square display. Which image is shown at what time can not be predicted, but if the device remains on long enough it will eventually generate every possible picture. All possible permutations of the 512 colors of the 4096 pixels are displayed in the long run, and that has a few special consequences.

The AIG device will show every location, every object, every thing, every entity in our universe, at any time, as well as any alternative reality, existing or not. Every star, every planet, every life form, every grain of dust. Every painting, even those that have never been made due to circumstances. Every kiss, even between people who will never meet in our world. The most beautiful thing you can imagine, but also the ugliest.

The AIG device will also generates swastikas, child pornography, breaks copyright, makes cartoons of the Prophet Mohamed, shows all the secret documents of the internal security service, and much more.

In addition, the AIG device is a violation of our privacy, because everyone, even you who read this right now, will be portrayed in all possible compromising ways. Every private photo that you keep secret will one day be shown by the AIG device, and that day may be today.

The AIG device is the ultimate work of art

There is nothing that will not be generated by the AIG device.

Every piece of art that has ever been made, every painting, every picture, every installation under every angle, every frame of every video, will be shown by the AIG device. Due to the limited resolution, the AIG device will show images of higher resolution in parts, but all parts will one day be generated. And that also applies to everything that will ever be conceived by artists, or could be conceived.

The AIG device does not make any sound*, but it can display any musical notation and thus any musical composition will be displayed on the screen of the AIG device. Every thought, every poem, every feeling that we could not put into words, is shown in every possible visual, abstract or non-abstract way. But does that mean that artists can now stop creating art? Or should an artist simply do what an artist has to do, regardless of the existence of an AIG device.

The universe is also a kind of AIG device, in which everything is tried, everything is conceived, and every niche is inhabited. If the universe is infinite, in size, time, or as a multiverse, then truly everything that will be generated by the AIG device will be made sometime by an artist. And although objectively, every individual artwork is totally insignificant and unimportant, subjectively, for that one artist and his audience, it is the real meaning of this existence.

*beside the gentle crackling clicks of the embedded Geiger counter.

The AIG device tells every truth

Over the image on which we could see the interior of a black hole will appear the text This is actually inside a black hole. And over the actual image of Mohamed text This is really Mohamed will appear. And under that one very compromising picture appears the text This has happened. But also, over each of those images, it will show, this is not a black hole, or this is a unicorn. Moreover; every possible text is generated.

This means that we can gain no knowledge from the images that we can see on the AIG device, because we can never know if it is true what we see. We can at best use the images as inspiration for our own subjective truth.

For the interpretation of the images we are limited by our own knowledge. How do we recognize truths that we do not know ourselves. Every image that will be shown by the AIG device can be found somewhere in our multiverse. If you look far enough. Zoom far enough in or out. Under exactly the right angle. Unknowingly we stare at the most beautiful places in the universe. To meaningful images of other civilizations in the furthest reaches of the universe, without understanding what we see.

The AIG device defies the laws of nature

Staring into the impossible.

The laws of nature prohibit the escape of information from a black hole, as well as the leakage of information from a universe before the Big Bang. The AIG device will nonetheless generate images that show the inside of black holes, and the state of the universe before it existed, and it will even show images far beyond our uni / multiverse. The AIG device may also display images of situations before they happen, or of information that was lost forever, which would break a number of time-related laws of nature if these images were transferred directly to the AIG device.

But because there is no real direct connection between the original images and the images that will be displayed by the AIG device, no physical law is broken. The AIG device generates all images by itself on the basis of a mathematical formula, without any external knowledge, and because the device will produce all images, it will also show these, normally impossible, images without any extra effort.

The Prophet in his underpants

The AIG device creates every possible satirical image of every religious figure, as well as the true image of god.

The device will not only recreate every existing satirical or non-satirical image of these deities, but also any image that will still be made, and even every image that would have arisen in alternative realities, such as all drawings of now deceased cartoonists if they were left to draw till old age.

More interesting is that the AIG device will also create the actual images of all the gods. The device will represent the actual appearance of each god, regardless of whether or not those gods exist, with and without a funny hat.

However, the AIG device was never intended to be blasphemous or to ridicule anyone or anything. The device simply creates each and every image, and that includes the aforementioned ones. It is almost as if the AIG device accidentally stumbles over these images, such as a nun in Brazil, who discovered the effigy of Mother Mary on a piece of toast. Such a discovery is an interpretation of the viewer, and not the intention of the toaster.

The only difference between a toaster and the AIG device is that the latter will actually make all the images, so that displaying the true image of your god, if you wait long enough, is an absolute certainty.

If you feel offended by the AIG device despite all good intentions, please report this. The artist is open to your argumentation.

The downside of a device that actually generates all images.

Generating all possible images has a number of legal and moral consequences. The device will generate all possible images that can be classified as child pornography, but also images that are in conflict with copyright or copyright law, deny the Holocaust, contain a swastika and all passages from Mein Kampf, cartoons of all presidents and royal houses, and so on. And to make matters worse, the illegal images that will appear on the AIG device do not appear there by accident.

Because it is known that the AIG device will generate all possible images, it is known in advance that these illegal, abusive, copyright-breaking and morally reprehensible images will also be produced. This means that the AIG device violates the letter of the law and various moral codes of conduct. However, it has never been the intention of the artist to do something wrong. There is simply no possibility to genuinely generate all possible images without these images.

If the AIG device is legal, it raises a few special questions. Can an image that can not be shown by the prohibition of child pornography be shown if the image is a photograph of the AIG device on which this image can be seen? Can a logo of a registered trademark be displayed on the AIG device without the permission of the copyright holders? Can you only deny the Holocaust in the Netherlands if that denial can be seen on the AIG device?

So there is something to be said for prohibiting the AIG device, but action painting should also be prohibited, and toasters, and children with colored pencils, because they too generate all possible images in the long run.

The AIG device will generate all your private photos, even the photos you would never dare to share.

It may be some consolation that you are not the only one whose private moments will be shown by the AIG device. From any existing and non-existent entity, the device will create every possible image, true or not, in every possible pose, during any possible activity, perverse or otherwise.

The chance is small that you will be portrayed in an inappropriate way, while you are still alive enough to be ashamed of yourself. But just as with a lottery, however small the chance is; there is a possibility that you will be shown in a particularly compromising way by the AIG device today.

The artist apologizes in advance for the inconvenience. The AIG device was never intended to embarrass you.

The operation of the AIG device

However, this approach has a major disadvantage. If the first pixel changes color in 2 milliseconds, pixel 2 changes color every second. Pixel 3 changes every 8 minutes, and pixel 4 every 3 days. Pixel 5 after 4 years. Pixel 6 after 2178 years. Pixel 7 after more than a million years. And pixel 8, if we had turned on the AIG device at the beginning of our universe, would almost have changed color for the 24th time. The chance that you will get to see something interesting with this design is therefore zero. And that is why the artist has opted for a different approach.

The AIG device traverses all permutations at random. The order is not fixed, and duplications will also be generated, so it will take longer to generate all permutations, but this approach is a very big advantage. The chance to see something recognizable today is still absurdly small, but not zero, and that gives the AIG device a romance that it would not have had otherwise.

But if you do not go through the permutations sequentially, without remembering which images have already been shown, there is only one way to guarantee that eventually all permutations will be shown. Then the image generation must truly be random. Unfortunately, an ordinary computer can not generate real randomness. The algorithms in computers use mathematical tricks that repeat over time.

For this reason, a Geiger counter has been embedded in the AIG device, which continuously detects gamma radiation. A computer connected to it looks at the time interval between two detections, and determines whether the last interval is longer or shorter than the previous interval. This data is, according to all known natural laws, completely random, provided that this universe really exists and is not a simulation.

On the basis of these truly random data, the AIG device adjusts a random pixel a few hundred times per second in a random color.

This guarantees that everything will one day be generated, if the device will be left on for long enough. And it also guarantees that the most beautiful, exciting, funniest and most fantastic image ever could be shown today. 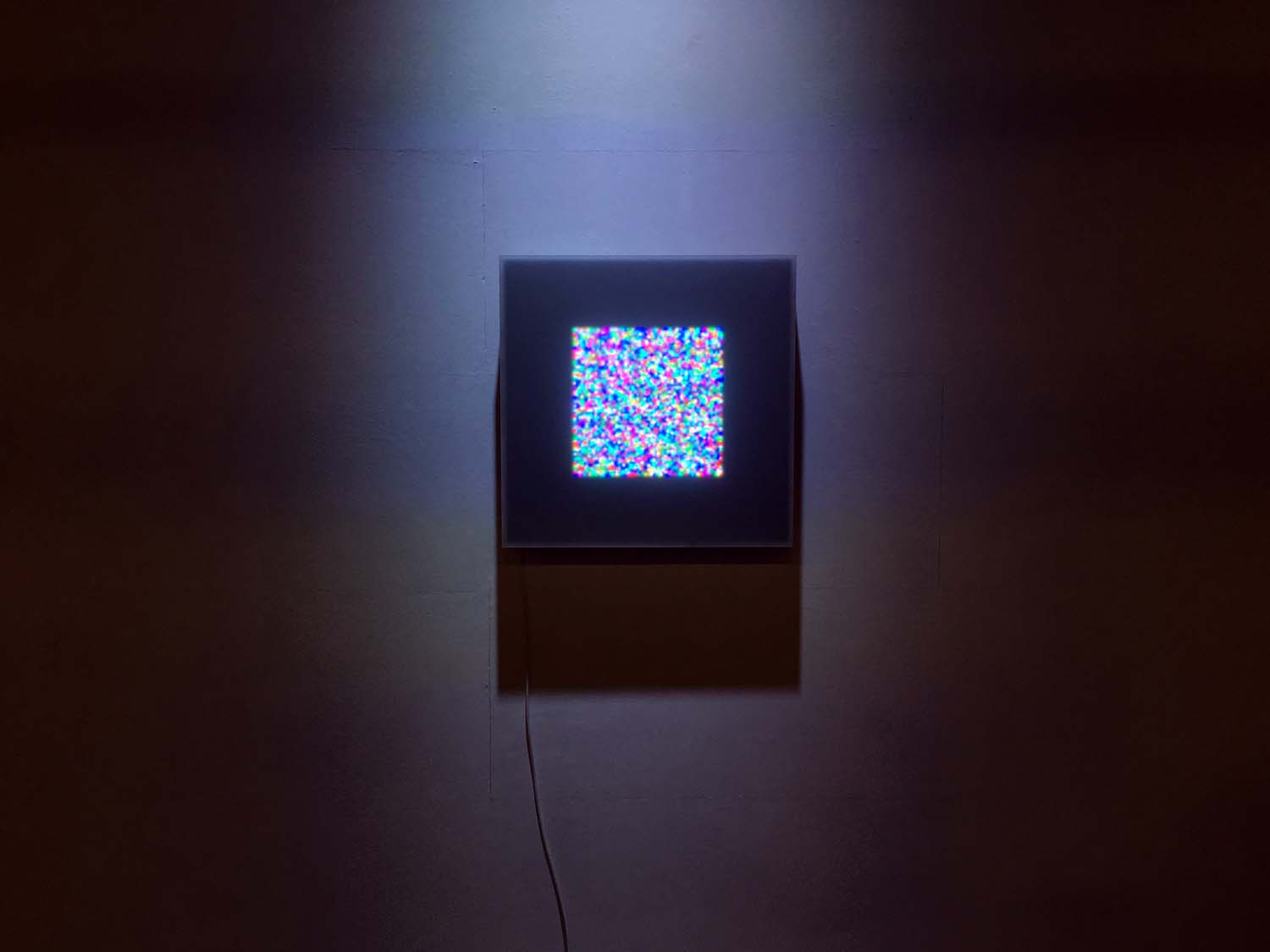 AIG type-A 1/5 is for sale at Duoversum, or on loan for renowned museums, provided it gets a prominent place.